ANDRE DERAIN
Here is the prints by Derain that are presently for sale. Click on the image to enlarge it. 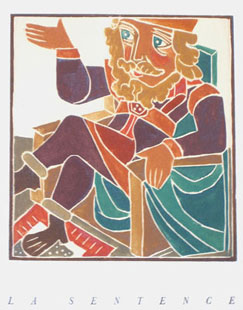 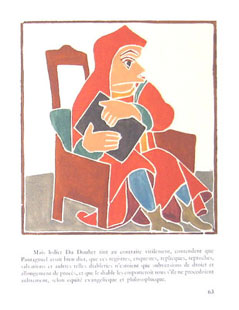 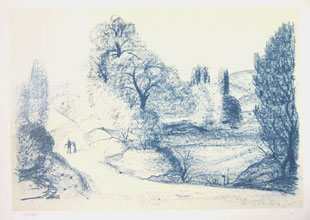 AndrÃ© Derain was born in 1880 into a family in the Dairy trade, who did not opppose his artist's vocation. Aged 15 he painted his first pictures and then enrolled at the Academie Carriere, where he met Matisse and Vlaminck whose studio he shared. In 1904, Matisse put them in touch with the art-dealer Ambroise Vollard, who bought up the contents of their studio. Derain showed at the 1905 Salon d'Automne in Paris with Vlaminck and Matisse ; the art critic Louis Vauxcelles declared their work to be "fauves" (literally, a wild beast).
Derain then split with Vlaminck, following Vollard's advice, he went to London where he painted his famous views of Hyde Park and of the river Thames. He next illustrated his friend Apollinaire's "L'enchanteur Pourrissant" with a set of woodcuts, the works being published by Kahnweiller in 1909. After the 14 - 18 war during which he was called up, Derain's painting became more conventional, consisting mainly of portraits, nudes, landscapes. An auspicious period dawned, his new dealer Paul Guillaume making a famous artist of him.
In the twenties, Derain showed in Paris, Munich and New York. Another side to his work was the design of stage-costumes and scenery ; Derain produced numerous prints, lithographs or etchings ; besides the woodcuts for Apollinaire, he illustrated the "Satyricon" with 33 etchings ; "DÃ©cervelages" with 8 etchings and aquatints, Max Jacob's "Le siÃ¨ge de Jerusalem, Grande Tentation CÃ©leste de Saint Matorel", illustrated in 1914 with 3 dry-points, etc. The artist died in 1954.